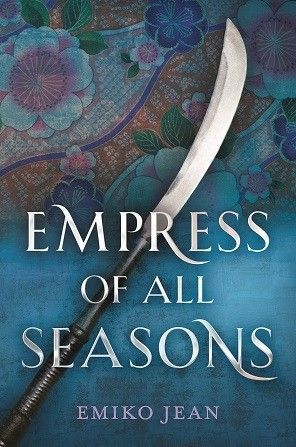 Synopsis: In a palace of illusions, nothing is what it seems.

Each generation, a competition is held to find the next empress of Honoku. The rules are simple. Survive the palace’s enchanted seasonal rooms. Conquer Winter, Spring, Summer, and Fall. Marry the prince. All are eligible to compete—all except yōkai, supernatural monsters and spirits whom the human emperor is determined to enslave and destroy.

Mari has spent a lifetime training to become empress. Winning should be easy. And it would be, if she weren’t hiding a dangerous secret. Mari is a yōkai with the ability to transform into a terrifying monster. If discovered, her life will be forfeit. As she struggles to keep her true identity hidden, Mari’s fate collides with that of Taro, the prince who has no desire to inherit the imperial throne, and Akira, a half-human, half-yōkai outcast.

Torn between duty and love, loyalty and betrayal, vengeance and forgiveness, the choices of Mari, Taro, and Akira will decide the fate of Honoku in this beautifully written, edge-of-your-seat YA fantasy.

I’m not a quick reader at all, in fact I’m not even a faithful reader.

I’m a read 5 books at once reader which is probably the main reason I’m slower at finishing books.

However with Empress of All Seasons I read 86% of it in one day and then quickly finished it off the following day. So when I say I devoured it, I truly mean it.

No other book dared to be read during these two days. I loved it.

Empress of all Seasons is based on Japanese legends and build up the world we get to read about that contains humans who rule the land and yōkai who’re outcast or enslaved monsters and spirits who the current emperor is set out to destroy.

Mari is yōkai, though not as beautiful as the rest of her clan of Animal Wives. Their main goal in life is to seduce human men and marry them before running off with their wealth to help keep the clan alive. Female offspring are a good addition to run away with too as they can be brought up to continue their way of life.

(yes, that does mean that male babies are left to nature as they don’t carry the traits of the Animal Wives)

To be sure Mari has a possible future ahead of her, her mothers trains her in hopes she can compete to become the new Empress and steal Taro – The Cold Prince’s wealth.

This is a great story of survival, not only must Mari give up her life as she knows it, she also has to keep her true identity hidden to make sure she’s remains disguised and (moderately) safe amongst the humans.

It is here in the center of danger that she sees a new possibility for her future, as well as that of all the other yōkai in the Kingdom. A chance at freedom.

Her initial exchanges with Taro are so sweet and lovely, we also get to read chapters from his point of view where we find out his true feelings about yōkai which gives us hope for the future.

& our last main point of view we see is Akira, a half human half yōkai, also known as The Son of Nightmares. His love for Mari also gives us hope. I was also really fond of his character exploration as it shows his struggle with being neither fully human or yōkai and how this has effected his life and thoughts.

I’ll be real though, both of the male point of views are the reason this book lost a star. I understand fully why we have them and that they’re both important and vital to the story and how it unfolds and how they impact how drastically the timeline changes.

But, they were both pretty frustrating to read. Akira as he felt he had a claim to Mari and followed her all the way to the palace to save her. Taro because he’s so ignorant to the world around him, which ulitmately makes him very weak and cares mostly only about himself.

I get it though, characters are complex and we need a diversity in how characters act or it would be a bland read and they really did add a lot to the story but y’know, reviews are my personal feelings and 4 stars is a good representation to how they altered my perception of the book I guess.

Yeah, that is pretty much my only criticism.

The story is well thoughtout too; I was a big plan of the plot and how everyones actions or inactions played an important part.

& I also really loved how Jean explores how parties who want similar outcomes can have conflicting actions that cause very different outcomes.

So to wrap this review up, I love Mari and would follow her to the pits of hell and would highly recommend you pick this book up.

30 thoughts on “Review: Empress of All Seasons by Emiko Jean”