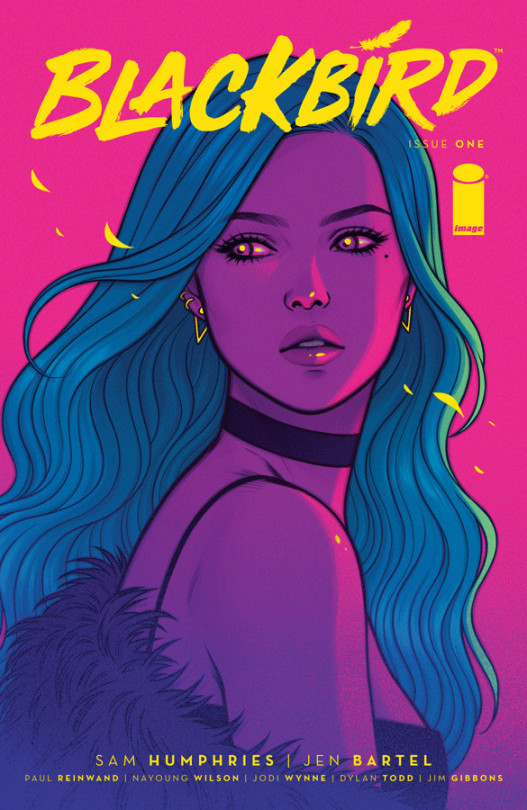 Synopsis: Nina Rodriguez knows a hidden magical world run by ruthless cabals is hiding in Los Angeles. When a giant magic beast kidnaps her sister, Nina must confront her past (and her demons) to get her sister back and reclaim her life. Don’t miss the first collection of the smash-hit neo-noir fantasy series from fan-favorite writer SAM HUMPHRIES (Harley Quinn, Nightwing) and red-hot artist JEN BARTEL (Mighty Thor)!

I was super excited to see Blackbird listed as available to download for review as its one of my most anticipated graphic novel releases this year.

(If you saw my BUJO from last year it featured one of her stickers on the front, and if you’ve seen me in person chances are I’m sporting at least one of her enamel pins or a top from her)

If the cover for this doesn’t make your eyes and soul happy then …I don’t even know what to say to you.

I love her work and colour choices. They’re always fab.

So of course I was excited to see her team up and create a graphic noivel! Her style is very recognisable.

Blackbird is a contemporary fantasy as its set now but feautres a magical world hidden inside ours. However, if you’re like Nina, who believes hard enough, you can find forums about it online.

After her mothers death she finds herself struggling badly (please note: there is portrayal of her struggle with substance abuse). One of the ways she finds comfort is in finding the truth about the magical worlds, the Paragons, and how she can join them.

This is her quest and part of the main story line of volume one. But after her sister gets taken by a Paragon beast she realises that her quest to become a Paragon has now taken a back seat as finding and saving her sister has become her main focus.

Whilst also battling with her substance abuse. And the fact that gaining access to magical words isn’t exactly easy.  Unless you have a vague idea of what you’re looking out for.

This change in directive gave us a chance to see some of Nina’s past as she confronts it and her demons, and the fond memories she had of her sister and mother.

The times we were in the magical world were easily some of my favourites because it allowed Jen’s work to really glow, and I just wanted to know more about them. Why did the Paragons exist? How do they exist? What do they do? Why are they hiding in plain sight?

We do get a few of these questions answered – the how is a key element of Nina’s plot and some of the trauma she has to face again as she gets closer to finding her sister.

The story also introduces a love interest who is very mysterious to start with but we do get to know him a little more. I can foresee him becoming a very integral part to the story as well s what his family could (and will) bring to the scene.

The two almost add a Romeo + Juliet vibe tbh, so I kind of hope this is explored some more.

Lastly, as no surprise to anyone. The character and outfit design was so beautiful.

Am I just a Jen Bartel fan? Could I just talk about her art for the whole review?

(Ugh, also, I’m so very tempted to go back to being blue haired to closet cosplay Nina)

Whilst I did give this GN 5 stars I think its very important to note that I found it had faults and I can easily see why those who aren’t completely enamored with JBartel would rate it lower.

Areas of the plot and the characters themselves could’ve been explored a little more.

And my biggest gripe with the plotline is the reasoning behind Nina being kept from the magical world being side stepped at every possibility. It became a little tedious and frustrating.

However, I was still kind of able to over look my grumbles a little because I wanted to find out as much as Nina did.

Often with GN series I do find volume 1 to be a little slower, or too much of a set up, so I’m not really too surprised that I wasn’t blown away with the story.

I will continue with volume 2 because it ends on a pretty high stake, though the writing really does need to be pulled tighter for a continued high support.

I just really like finding magic in the mundane ok.