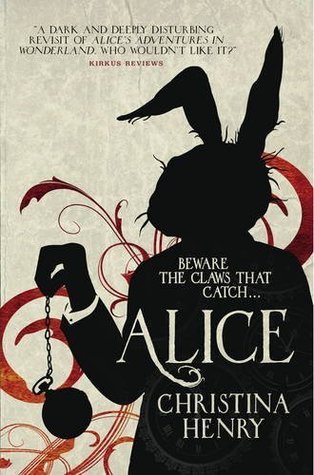 Synopsis:
In a warren of crumbling buildings and desperate people called the Old City, there stands a hospital with cinderblock walls which echo with the screams of the poor souls inside. In the hospital, there is a woman. Her hair, once blonde, hangs in tangles down her back. She doesn’t remember why she’s in such a terrible place-just a tea party long ago, and long ears, and blood… Then, one night, a fire at the hospital gives the woman a chance to escape, tumbling out of the hole that imprisoned her, leaving her free to uncover the truth about what happened to her all those years ago. Only something else has escaped with her. Something dark. Something powerful. And to find the truth, she will have to track this beast to the very heart of the Old City, where the rabbit waits for his Alice.

Wow. This duology is amazing.

Its been a while since I finished it but after including it in my favourite reads of the year I realised it was about time I dedicated a post to it in hopes others will give it a try.

I know I have already convinced some people in person so now its time to take to the web!

Alice is a horror/fantasy retelling of Alice in Wonderland. Its darker and grimier and you’re gonna love it.

(There are some content warnings for this series including but not limited sexual assault, rape, and forced prositution)

We follow Alice and Hatcher on a journey through gaslit London after their escape from an Asylum with their main task being to defeat the Jabberwocky and the crime lords of the city (book 1) and the evil Queen (book 2).

The way the villains and their lairs are portrayed really capitvated me. Each of them were so very different and full of evil and magical elements. They really did come alive on page.

Alice also has to come to terms with her past as its the mob bosses who left her so broken she ended up in the Asylum, and as she slowly regains her memories this time she faces them, faces the villains, and grows as a character.

She also has to face her present – magic that has been kept hidden from her. But can she trust Hatcher and Cheshire?

My favourite thing about Alice is that as she gains information and grows more confident in her own strength (as well as having some back up from the truly murderous Hatcher) she takes chances, does what she can to not only provide a safe future for herself but others too. Do they all get a happy ending? Not nescesarily. Does she do what is in her power to give them a path to get one? Yes.

But Wonderland is not a welcoming or friendly place and even the most sweetest of characters can make truly evil choices in hopes to better themselves. Even if it means selling out someone else.

As mentioned Hatcher is a murderous character but god he is a wonderful being. He may not be the usual “book boyfriend” material but he is fucked up and ready to protect Alice with his life. He has his own problems he has to battle but he is doing his best.

Whilst the first book, Alice, sticks to the London setting and exploration of the grimy underbelly it works really well at slowly introducing the fantasy/magical elements so you’re ready to accept this world is much larger than Alice originally accepted.

The second book, Red Queen, has a setting that is outside of the city and a more fantastical setting as at this point you’re more familar with the world and what can actually happen there it makes sense.

During the second book Hatcher gains some more knowledge about his past that he had forgotten thanks to his Madness and we get a better understanding of why he is the way he is, it was a form of self preservation.

I really liked the ending of the duology though I do think I would really enjoy a short story checking in with the characters and what they achieve next.

Lastly hearing Christina Henry talk about Alice (and her other characters/books) was such an amazing experience and really made me want to read her other work.