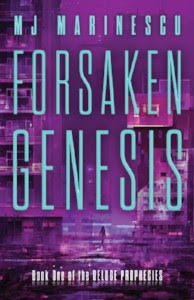 Synopsis: The world has changed in more ways than one. Most humans live in the safety of the hive cities, massive industrial complexes walled off to the outside world. Yet, the dangers of the wilds are no longer limited to the outskirts. Rumours abound of strange things in the night. Sightings of subhumans and citizens being abducted, whisked off by men in vans or worse. The Department of Control keeps a close eye on the citizens of Avalon but who are they protecting?

Melissa thought the world outside the facility would be safe. Free from the pain and the incessant tests of the men in white coats but what she finds is a world unknown. Fleeting memories call to her like a siren song pleading for her to remember. Can she figure out her strange dreams and the shadowed figure who hounds her in her sleep? She must discover who she is and come to terms with the truth that may have been kept from her for good reason if she hopes to survive in this strange new world

I’m excited to be able to share an extract of this book with you today, its also the opening of the book so you can see how much it hooks you! I was supposed to share a review today but alas I ended up working a lot more than I had planned before going away which didn’ leave much time for reading. Speaking of going away, I formatted all this on my mobile so hopefully its all readable haha.

Don’t forget to check out the full tour.

MJ Marinescu has always dreamed of being a novelist. Writing stories from a young age, the author has never faltered from that dream as well as devoting time to fitness and martial arts. Born in Ottawa Ontario, the author now lives in Calgary Alberta and enjoys art, animals, and nature.

🔮 // TAROT CHEAT SHEET: THE EMPEROR⠀⠀⠀⠀⠀⠀⠀⠀⠀
🔮 How interested are you in tarot?
🔮 i rarely do those autocorrect posts by yknow what, today i want to know how your phone autocorrects:
ad - review copy: @delreyuk + @rachelkennedy90 🖤 are you ready for a new sapphic retelling? good, because if so MALICE by @heatherrwalter5 is probably the book for you. especially if you like to see a descent into villainy.
💛 last photo from this months @illumicrate unboxing, they asked for the mug + related series as a photo prompt however your gal does not have anything by that author so i focused instead on the best series ever and it's beautiful heartglass necklace by @no0nedesigns
💛 final day of the @illumicrate photo challenge, but i will be sharing one other unboxing themed photograph tomorrow - my favourite of the four i took!
💛 whats your favourite bookish merch?
💛 // i'm taking part in the photo challenge for @illumicrate's FIGHTING SPIRIT march box, the prompt for today is to share an unboxing. unsurprisingly i couldn't wait for this box to arrive as it included a THE BONE WITCH by @rinchupeco inspired item.
🔮 // TAROT CHEAT SHEET: THE EMPRESS