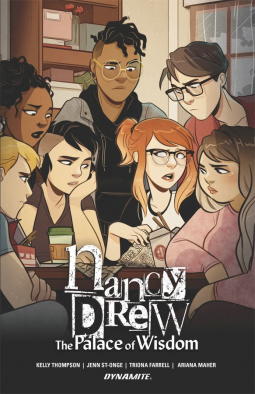 Synopsis: Nancy Drew is seventeen and good at everything… ESPECIALLY solving crimes. But her totally-in-control-and-obviously-running-perfectly-smooth-(but-not-really) life hits a snag when a mysterious message drags her back to the hometown she left behind. There she’ll have to find out which of her friends are still her friends, which are enemies, and who exactly is trying to kill her…and (hopefully) stop them before they succeed.

Believe it or not this is my first introduction to Nancy Drew so I didn’t have any ideas what I was getting myself into.

All I knew is that the lovely Jenn St. Onge was illustrating this graphic novel which meant I just had to read and review it because if all else went badly I knew I’d love the art.

This was such a delight to read.

I loved being introduced to Nancy and her friends this way. I really got a good understanding of each of the characters and their past. I wasn’t ever confused which is awesome considering I really was jumping in blind.

Obviously George ended up being my favourite; a queer punk. What can I say, I got a type.

But Nancy’s aesthetics were drop dead goregous too.

I really enjoyed the story too. We follow Nancy back to her home town after she receives a mystery letter which leads her, and her group, into a solving a mystery that the cops had looked over a few years earlier that was still causing women to be found dead.

It was great how every character was utilised to their full potential so they could all work together as a team to solve the case. At the start Nancy does want to tackle it alone as she’s forgotten what it was like to have such a supporting team but it was super refreshing to see them sink back into a routine that worked for them all without much negativity.

I really liked that whilst Bess was initially portayed as someone who couldn’t keep up with the team she got Her Time To Shine! Without her knowledge they wouldn’t have made much progress. Aslo she’s hella cute and the crush one of the lads has on her is downright adorable. Very nice page time between the two of them.

We’re also introduced to a new character and even though it would have been very easy to keep him as a bad guy he gets some great backstory and developement which I hope means he’ll be around for a while.

I don’t want to fully explain the case, its twists and turns it has, or solve it for you so I guess I’m just going to have to leave you with one of these title pages because its so perfect.