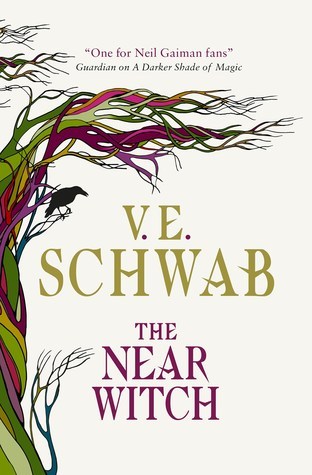 The Near Witch is only an old story told to frighten children.

If the wind calls at night, you must not listen. The wind is lonely, and always looking for company.

There are no strangers in the town of Near.

These are the truths that Lexi has heard all her life.

But when an actual stranger, a boy who seems to fade like smoke, appears outside her home on the moor at night, she knows that at least one of these sayings is no longer true.

The next night, the children of Near start disappearing from their beds, and the mysterious boy falls under suspicion.

As the hunt for the children intensifies, so does Lexi’s need to know about the witch that just might be more than a bedtime story, about the wind that seems to speak through the walls at night, and about the history of this nameless boy

I’m sure all readers know by now, but for the few who don’t The Near Witch is V.E. Schwab’s debut book, first published in 2011 and it only sold for 18 months. When I heard Titan would be republishing it with The Ash Born Boy short story included I just knew I had to finally read these stories.

I also ended up being lucky enough to receive a copy from the publishers in exchange for an honest review.

I’ve only read A Darker Shade of Magic and This Savage Song by Victoria before so I am familar with her work (oh and a sampler of The Archived) and could see the growth in her writing. It has the same kind of themes are her other works; dark and eerie, strong characters who feel like outsiders, and a breath taking setting.

(Honestly my only complaint, which is more humorous than anything, is that it includes the “let out a breath they didn’t know they were holding” line which meant I got to add it to my list)

I first started reading this whilst waiting for an x-ray and whilst I was enjoying the words, the lightings in hospitals are dire so I just had to give up so they wouldn’t ruin my enjoyment.

Picking the book up back home in the comfort of my bed was a much better option and I got through it a lot quicker too. The whole atmosphere of this book sucked me right in and I had to pull my window shut to keep the wind out.

The Near Witch follows Lexi who lives in a litle town called Near. Its surrounded by the moors, wind, and the cautionary tales of the Witch from Near. Whilst the townsfolk all fear what lies beyond and the 2 possible witches living on the outskirts, Lexi is a bit more open to things with thanks to how her father brought her up.

She’s a skilled tracker, wood cutter, and storyteller. She’s open to She’s definitely progressive past her years because no one else is happy she’s not sat at home sewing and baking more.

I really liked reading this from her point of view because she was curious, rebellious, and cared for her sister, mother, and those in the town that others may overlook.

One day a stranger arrives in town and the day after children start to disappear. Lexi is the only person to not assume the worst and starts to investigate, to take a chance and find out the truth.

Her will power really made invested in this story. Who is this stranger? Where are the children disappearing too? Is the Near Witch back? Can Lexi save the children, and the stranger?

I’m all here for Lexi passive aggresively going against the patriarchy, to do what feels right in her bones. BUT ALSO I’m all here for her Mother. She’s someone who seems a bit distant at the start but honestly if you don’t love her mother quietly supporting her then we can’t be friends.

This story is a little slower paced than her later books but I think any Schwab fan can enjoy it and appreciate that she’ll always be giving us characters we love.

“Everything seems different at night. Defined. Beyond the window, the world is full of shadows, all pressed together in harsh relief, somehow sharper than they ever were in daylight.
Sounds seem sharper,too, at night. A whistle. A crack. A child’s whisper.”

The additional short story of The Ash Born Boy hit me with so many strong feelings that I had to keep blinking back tears whilst finding out the truth about Cole’s past.

He doesn’t have the easiest of childhoods, especially when your emotions effect your powers so easily and strongly.

I just want to be there for Cole and tell him everything is going to be okay & allow him to explore and understand his powers in a safe environment.

Man, I feel like I’m not doing this book the justice it needs for its rebirth.

Basically, to keep things simple I really liked this book! And remember, don’t listen too deeply to the wind.