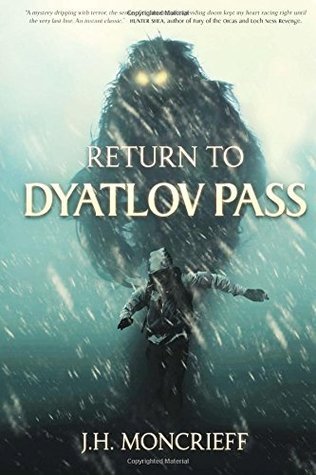 Synopsis: In 1959, nine Russian students set off on a skiing expedition in the Ural Mountains. Their mutilated bodies were discovered weeks later. Their bizarre and unexplained deaths are one of the most enduring true mysteries of our time.

Nearly sixty years later, podcast host Nat McPherson ventures into the same mountains with her team, determined to finally solve the mystery of the Dyatlov Pass incident. Her plans are thwarted on the first night, when two trackers from her group are brutally slaughtered.

The team’s guide, a superstitious man from a neighboring village, blames the killings on yetis, but no one believes him. As members of Nat’s team die one by one, she must figure out if there’s a murderer in their midst—or something even worse—before history repeats itself and her group becomes another casualty of the infamous Dead Mountain.

Late last year J.H. Moncrieff reached out and asked if I’d be interested to review her book Return to Dyatlov Pass and I’m always down for more Horror in my life so of course I said yes to this.

I’ll be totally honest with you; I had no idea about Dyatlov Pass and that its a real mystery that happened so this was my introduction to it and I’m very glad it was.

I don’t know why I didn’t know about it but I do now and honestly when I finish this post I’m going to go and read up on it even more. Not that I’d have too because this book does so well at weaving in the real facts that I feel pretty confident in being able to explain this to someone.

For anyone in the same boat that I was; the Dyatlov Pass incident is a true unsolved mystery where 9 Russian skiers died in the mountains brutally.

Return to Dyatlov Pass‘ opening is a flashback to the initial event, constructed and interpretted that fits best for a fictional retelling. We see the final moments of the last living member, Lyudmila, as she fights for survival in those brutal mountains. Only to be murdered by a very tall and strong creature.

The rest of the story is set in the present time from Nat’s point of view. She’s a podcast host who focuses on unsolved mysteries and is goaded into trying to solve the Dyatlov Pass incident.

So off she goes with a specifically picked and trained team in hopes to maximise their chance of survival against the cold weather.

From the cover and the opening scene we, as the reader, are well aware that the cold weather are the least of their troubles. But venturing into the unknown without that knowledge or understanding of how to avoid being noticed by them puts the team at a major disadvantage.

What I loved most about this story is that its fast paced. It doesn’t waste any time, every scene adds something to the story, so we’re always moving forward and learning new things. Its the perfect book to pick up and finish in a day or two to help with a book slump.

Moncrieff does a great job at building these three dimensional characters into real people in a short book. You have clear characteristics that set the members apart from one and another. You feel a clear hatred to the characters you’re supposed too and empathy for those who deserve it.

Nat was easily my favourite character from this book as she has a lot to her and always does her best to see the best in everyone. Even those who probably don’t deserve it. She wants the team to work well together and suceed.

There are elements that definitely surprised me in this book that I didn’t really consider as a possible outcome due to how ferocious the Snowmen are but it was definitely nice that the investigative team had a fighting chance.

But mostly, that ending! Oh my god, I couldn’t have predicted it at all and I’m still a little shook that that was how things all wrapped up.

Overall this is definitely a book I’d recommend horror fans to pick up. Especially those new to the genre as its not overly bloody, even the gruesome descriptions are done with class, and as we know from the get go whats actually happening we’re spared a little of the fear factor that Nat and her crew face.

(Early sidenote: If you are interested in reading it soon then Books and Tea are doing a readalong of it in February – more information to come.)

Though, it is still very tense at times as we have no idea if any of Nat’s team will survive or not. They always have a chance and a little bit of hope left. But is it enough?

I ended up rating this 4.5 stars as even though I believe Moncrieff makes perfect use of 162 pages I do think I would’ve liked it to be a little longer. Perhaps an epilogue of the aftermath? Or hint at another team following the trail?

36 thoughts on “Review: Return to Dyatlov Pass by J.H. Moncrieff”