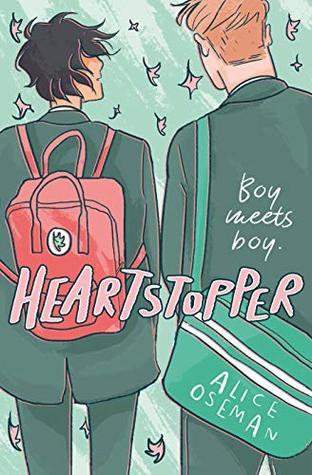 Synopsis: Charlie, a highly-strung, openly gay over-thinker, and Nick, a cheerful, soft-hearted rugby player, meet at a British all-boys grammar school. Friendship blooms quickly, but could there be something more…?

Charlie Spring is in Year 10 at Truham Grammar School for Boys. The past year hasn’t been too great, but at least he’s not being bullied anymore, and he’s sort of got a boyfriend, even if he’s kind of mean and only wants to meet up in secret.

Nick Nelson is in Year 11 and on the school rugby team. He’s heard a little about Charlie – the kid who was outed last year and bullied for a few months – but he’s never had the opportunity to talk to him. That is, until the start of January, in which Nick and Charlie are placed in the same form group and made to sit together.

They quickly become friends, and soon Charlie is falling hard for Nick, even though he doesn’t think he has a chance. But love works in surprising ways, and sometimes good things are waiting just around the corner…

From the author of Solitaire and Radio Silence comes a bind up of the first two chapters of Heartstopper, an ongoing webcomic.

Back in December the wonderful staff at @5GetBookish hosted a giveaway for the 12 days of Christmas and the only one I entered I won! It was the YA giveaway because d’uh thats what I read most of.

I ended up with a duplicate so I passed that on to a friend but the others I’m very excited about.

The first I picked up has been this book, Heartstopper. I had the intention to read a few pages to help me feel relaxed and have an early night due to an early start the next day.

An hour and a half later I’d completed the book!!

I was very sleepy the next day but it was worth it.

Heartstopper is my first Alice Oseman book even though I’ve now met her twice. I’m glad that I’ve finally read something because she was very lovely to talk too both times I met her.

This is a companion graphic novel to her book Solitaire as it follows some side characters from that. I can safely say you can read this without having read Solitaire as its very easy to follow and is set before Solitaire too I believe?

Anyway the art itself is v cute and fluffy, a v loose kind of style that lends itself very well to the characters and story. Looking back at the cover now I can see how Charlie and Nick’s slightly different posture tells us a little about them.

This is genuinely such a sweet and fluffy read about friendship blossoming into something more, but volume one is very much the early stages of this Something More so don’t pick it up expecting a fully formed relationship, yet.

This isn’t a criticism though, its handled well and shows both of the boys’ development and questioning whether something is happening. Its also very subtle and cute.

From past experiences I’d say it really explores a new crush really well and I found myself feeling similarly to Charlie as the story progresses.

My favourite thing was to notice the subtle ways Nicks change in feelings are shown, there will be times when we see him smiling away at Charlie and fihgsca its cute okay!!

The best possible thing about this is that if you do want to read it now you can as Alice posts its on tapas so you can read and support her even now.

My only concern with this is that go in knowing that there is some on page sexual assault and the start of the book features Charlie in a very shitty relationship, but him coming to terms with this and standing up for himself to end it was nice to read.

I’d rather end it on a positive note, so I’d also like to mention how much I enjoyed reading their interactions with other friends as it means we get to know them better and also see why the Charlie + Nick duo works so well.

I want to continue reading this but I think for now I’ll wait for physical copies.