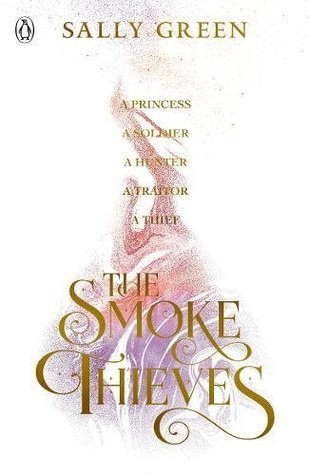 Synopsis:
A princess, a traitor, a soldier, a hunter and a thief. Five teenagers with the fate of the world in their hands.Five nations destined for conflict.

In Brigant, Princess Catherine prepares for a political marriage arranged by her brutal and ambitious father, while her true love, Ambrose, faces the executioner’s block.

In Calidor, downtrodden servant March seeks revenge on the prince who betrayed his people. In Pitoria, feckless Edyon steals cheap baubles for cheaper thrills as he drifts from town to town.

And in the barren northern territories, thirteen-year-old Tash is running for her life as she plays bait for the gruff demon hunter Gravell.

As alliances shift and shatter, and old certainties are overturned, our five heroes find their past lives transformed and their futures inextricably linked by the unpredictable tides of magic and war.

Who will rise and who will fall? And who will claim the ultimate prize?

Okay so here a few things to know about the The Smoke Thieves:
– it is the first in a series
– its a YA historical fantasy
– its almost 500 pages long
– it has 5 points of view

And honestly I feel like many readers wont pick up the second, I’m very tempted to continue the series if I find it a good price but its gotta be a good price.

My reason for thinking this is just because the book didn’t have to be 500 pages long; the plot took too long to get going and it felt very weird when the characters put together what the smoke could be used for at the very end when you’d already figured it out ages ago because its revealed in one of the characters chapters within the first 80 pages or so…

I have no issue with multiple point of views usually but I did find Ambrose’s chapters rather boring to read so those slowed my pace down, and when the plot can’t be resolved until they all meet up and put their knowledge together its a bit of a drag.

Now time for some positives though because like I said I do plan on reading the next one!

Tash’s pov were my actual favourites, she has a lot of growth in the book and is full of personality. She made the book super enjoyable and I just want the best for her and for her to get some fancy new boots.

I also really liked Edyon due to his charm, how he’s taken to thieving out of boredom and how he’s very flirty with guys – because of this I also enjoyed March’s chapters in the second half of the book as this is when March is more aware that perhaps he’s also queer and the two develop a very odd relationship under very odd circumstances.

Due to the lies told between March and Edyon I am very interested to see what the future holds for them.

I should mention Catherine too as I’ve spoke about all the others, but if you’ve read the book I’m sure you’re fed up of hearing about her from Ambrose though. I actually feel very strongly about her and want to protect her too, she’s a princess who’s father runs the country through fear and see’s her as nothing but a barganing tool to help him gain further power. He really is vile, but will he go as far as killing her too? Who knows? She has to put up with a lot of bullshit because of this and honestly she did great, I would’ve just caved.

From what I recall the end of the book leaves most of the characters together or very close by, their actions directly effecting each other and the moves they make next so this is one of the main reasons I want to pick up the second as I think it’ll alter how the series reads and advances.

As you can see I have reasons to be conflicted with this book, some I mentined above and stem from meeting the author and her seeming less than passionate about her work, but I hope she does the characters justice.

21 thoughts on “Book Review: The Smoke Thieves by Sally Green”