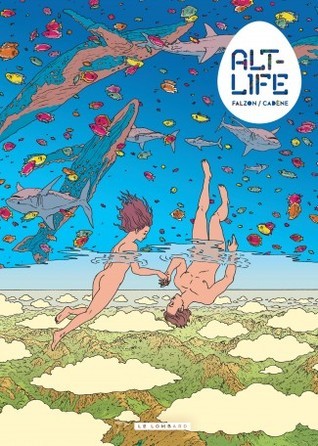 Synopsis:
On a dying Earth in a not-so-distant future, Josiane and René are the first to enter a new virtual world where just about anything is possible… Part dystopian love story, part psychedelic meditation on human nature, “Alt-Life” takes the reader down a mind-bending rabbit hole of desire, loneliness, and self-discovery.

This graphic novel blew me away.

Upon opening the graphic novel theres a few patterns or simplistic illustrations that I just loved so much I had to share bits of them. I’m not even sure if anyone else will appreciate them as much as I did but they left me feeling inspired.

If I had to describe it simply to you I’d say “its like the Matrix but if we chose it to happen”.

The Earth is dying and Josiane and René are the first two people to enter our new world  – a virtual world.

They’re stripped and entered into these “eggs” where at the touch of their fingertips, their thoughts, or their words they can create anything.

Whilst the two are in sepeate eggs they are in the new world together, just them. So of course the first thing they do is generate more people so it feels like empty and lonely. These are not real people, they’re just part of the program, but the more Josiane and René interact the more the program learns so its more natural at generating responses and actions. But still not quite human.

You might have a bit of an idea where this is going.

Josiane jumps in with two feet and after talking to one of the divers she then touches his junk. Without permission. And this graphic novel handles this so well that I’m just going to share an image from it:

and its that easy folks.

Consent is important. Consent has to happen.

It could’ve so easily not had this involved given its a virtual world, virtual people, but they chose to have it and I LOVED IT.

I also really liked that its the female character who tried this and thenwho also experiments most with her sexual fantasies. She ends up completely overwhemled by how wild and extravagant they are later on and seeks Rene out for comfort and normality as he’s mostly rejected the idea of sexual acts because they didn’t feel real enough / he was too aware it was made up.

I think seeing these polarising experiences with sex were such a great exploration of sexuality and super important. Especially for those who are on the ace-sepctrum, even if this wasn’t totally ace rep René didn’t have the drive he once had and found other ways to pass the time.

I think I’ve spoken enough about the sexual aspect of this book because there is more to it.

As they can create anything René does just this and explores how far he can take creating his own world! Its really interesting to see just how far his experiment goes as it really pushes the boundaries on what you could create in a reality that allows you to create anything.

Later on in the story the rest of the real world who signed up to live here are allowed access – once they’re sure its all a-okay the system works – and it was very interesting watching how other people adapted. Or didn’t. Or struggled.

It also provided new possibilities and exploration of their ideas for Josiane and René and causes them and the reader to think about the outside world a little more.

It gets us asking questions!

Overall I really recommend this graphic novel, its very different to everything else I’ve read but its got such a great social commentary on our lives and the possibilities of the future that I couldn’t not love it. Plus the whole matrix vibes!!

My only complaint was the font wasn’t super easy to read… if I wasn’t squinting so much maybe it’d have 5 star.