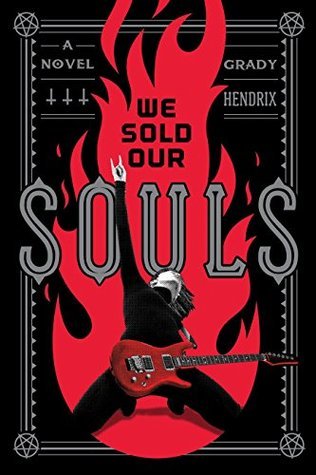 Synopsis:
A new novel of supernatural horror (and pop culture) from the author of Horrorstor, My Best Friend’s Exorcism, and Paperbacks from Hell.

In the 1990s, heavy metal band Dürt Würk was poised for breakout success — but then lead singer Terry Hunt embarked on a solo career and rocketed to stardom as Koffin, leaving his fellow bandmates to rot in rural Pennsylvania.

Two decades later, former guitarist Kris Pulaski works as the night manager of a Best Western – she’s tired, broke, and unhappy. Everything changes when she discovers a shocking secret from her heavy metal past: Turns out that Terry’s meteoric rise to success may have come at the price of Kris’s very soul.This revelation prompts Kris to hit the road, reunite with the rest of her bandmates, and confront the man who ruined her life. It’s a journey that will take her from the Pennsylvania rust belt to a Satanic rehab center and finally to a Las Vegas music festival that’s darker than any Mordor Tolkien could imagine. A furious power ballad about never giving up, even in the face of overwhelming odds, We Sold Our Souls is an epic journey into the heart of a conspiracy-crazed, paranoid country that seems to have lost its very soul…where only a girl with a guitar can save us all.

I first heard about this book when Jamie told me about it as I was buying another of Hendrix’s books at YALC this year so when she emailed about a chance to read an ARC of it I was excited!

We Sold Our Souls is about Dürt Würk, heavy metal rock band, who’s souls have been sold yet they don’t remember.

The majority of We Sold Our Souls is from DW former guitarist, Kris Pulaskis’ perpective and I think she was the perfect person to tell this story. Its set years later when Kris is fed up of her life draining hotel desk job cleaning up drunk guys piss.

She knows there is injustice in her current and past heavy metal life simply because she’s a woman and she never used to let that get her downtrodded. She rocked hard, kicked hard, and didn’t give a fuck so long as she had her music.

So now she’s wondering how the fuck she ended up here accepting her dead end job and no metal life.

When she sees the ex lead singer of DW is doing a final tour she decides enough is enough, she deserves answers and to get her life back. Her attitude, strength, and will power were great. I love Kris okay!

But not everything is as it seems.

The pace of the horror throughout this book is amazing, it starts simple and has you questioning what that dude is taking to come up with such wacky ideas, but soon the conspiracy theory starts to unfold. To show Kris that there is more out there and this journey isn’t going to be as straight forward as she had hoped.

We get both gorey horror and supernatural horror. And it all ties in with music which makes me think this would make an amazing movie.

Because of how integral music is to this story I read about two chapters before I went back and started tabbing every song and band mentioned. Then using the most popular songs from each band I put together a playlist! It really is a love letter to heavy metal.

What I loved most is that I’ve been listening to the playlist since finishing the book and there are certain songs and artists that really connected me back to the story and made me think again about what Kris was going through at that time. It really has made a huge impact on me.

Even though this is a horror the ending blew me away because it sends such a positive message to everyone and it really illustrates how you can have an equally positive outcome on other peoples lives.

So once you’re done reading Sawkill Girls from my previous horror recommendation, you better go pick this one up too!

16 thoughts on “ARC Review: We Sold Our Souls by Grady Hendrix”